I borrowed my Nissan NP200 to a friend because they did not have any Transport. I struggled for 3 Months to get it back because the Person who Borrowed it refused to give it back. He made use of his Bodyguards to Intimidate me everytime I asked for it.
At one stage he said that I can go and pick it up at his place. When me and my daughter arrived they kept us hostage for more than an hour.
That's when I decided to get hold of Rodney van Rensburg whom my friend Lisa referred me to. She said that he's the man to hire.
I contacted Rodney van Rensburg from ISS-INVESTIGATIONS and we agreed to an amount.
Within a week my Bakkie was back in my Possession.
Thank you to METRO SWAT INTERNATIONAL and ISS-INVESTIGATIONS for such a great Team Work.

I had a Abusive Marriage for 21 Yrs and Couldn't leave due to Financial Abuse. He didn't want to Divorce me and he had a Mistress in almost every town.
So, I decided to go and see someone to speak to. This person said that I must get all the prove I can icw his affairs, Financials and Policies. She then gave me the Number of Rodney van Rensburg from ISS Investigations.
I called Rodney for a Consultation and we went through the Instructions and I then Signed a Mandate.
I was kept up to date and yes, it took a while but I got all I Needed to Proceed. He really did not know what was coming his way.
I hereby just want to thank Rodney and his team for the great work.
I'm busy with my Divorce case and still being assisted by this team. 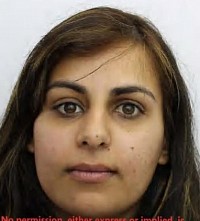 There is a Facebook Blog doing the Rounds that myself and Janine are Scammers.

Bibi Sareff opened a blog on Facebook badmouthing us as well as the Company.

I personally think that all uneducated persons should learn the difference between not happy with Service and a Scammer.

She requested a full Background Check along with a Asset Check. On Completion of her requests she came to pick up her report which was given to her.

All of a sudden she complained and said she asked for Financial Statements and it was not in the report.

Now according to our job description from her there was no mention of financial statements or reports given to us. She received what she asked for from day one which was a full Background and Asset Check.

We explained to her that we had to apply for financial statement by obtaining a Section 205 from the High Court and that the price was not included in the first place. It would cost her extra. So she thought it best to tell us we are trying to scam her.

Thank you for your Great Security Services. Always there when we need you.

I was Scammed by a gentleman Claiming to be from South Africa and is Stucked in Ireland. He do have a Business in Ireland and would Desperately like to move back to join me in My Knysna Home.
Unfortunately he had a Problem by selling his Business and I assisted him to move here. He then Contacted me and send me Documents that his Company was sold and his awaiting the Transferred Funds.
Again I assisted. We actually fell in love over Internet.
This man arrived at Cape Town Airport and booked into an Hotel which was Confirmed.
I Paid 7m Rand into this man's account. And when he landed in South-Afica another 2.8m. We then decided that he is going to buy a car in Capetown and drive through to me. Another 700k.
I did not hear from this man for 3 Months and Decided to Search for a Private Investigator.
I got in touch with Imbewu Specialised Security and Private Investigator Rodney van Rensburg. We've set up a Meeting, I signed a Mandate ant after 2 Months this Person was Traced. The Exact Person accent and all.
The Private Investigator arranged a Confrontation (meeting), with the Person and Myself.
Thanks to Imbewu Specialised Security this Person is actually paying me back. 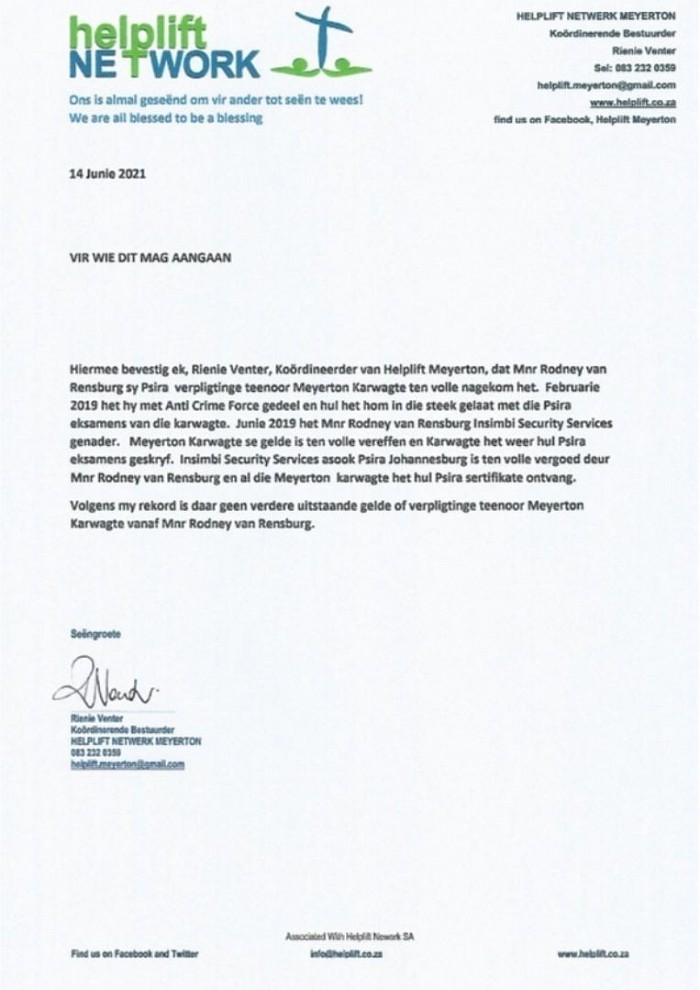 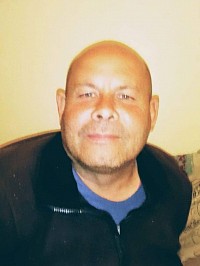 This one added by myself.

Mervin Cook
The full story of a Unregistered (Rejected by PSIRA) individual who Intimidated me to Employ him.

Early in January 2021 Mervin Cook had send me what's app messages to Employ him. For he is Struggling to get work after Pieter Swanepoel from Supra took him for a ride and actually steels money from his Clients.
I did my little investigation into this Mervin Cook and he rendered his services without being PSIRA Registered. He then asked me for help. I went to PSIRA office in Centurion to assist him. But unfortunately they instructed that he must re-apply.
After he did his course E, D and C he started to bad Mouth me because he is not yet on the system by PSIRA. The college will only submit applications in batches. Their Batches will only be Submitted to PSIRA on the new Month 5th of May 2021.

I drove to his house twice and to PSIRA Centurion to sort out his PSiRA due to his Rejected Accreditation by PSiRA.

Thank you Rodney for your Great Service. I highly appreciate it.

Don't let some old fart make you negative or try to bring you down. You proved to me that you Deliver  Great Service.

From myself Rodney van Rensburg

I wish not to keep this from my Clients.
CHAD MOUTON
Chad hired us for a case Cheating Spouse where his wife Cheated on him. He was more than happy with the Investigation and he divorced his wife.
A few years later his Mother made use of our Services. Things did not go well at all and Chad's Mom Instructed us to stop with the Investigation. Work was done and Chad wanted a full refund. I decided to pay him 50% back until he remove all the bad Reviews. He never kept his word and I then stopped paying.

We made use of Rodney van Rensburg and after 2 weeks of silence my wife decided to Google this Private Investigator and we came across some bad Reviews and thought OK we were Scammed. I did not know how to handle this situation.

Now Rodney was referred to us through our attorney. I contacted him and said I'm stressed up. I explained to him the situation and he shared with me that he received the whole report as Requested 3 days ago.

We then went through the following day and the attorney told us that with the Report we will win the case. We went to Court and Rodney were there. I thank God that I never phoned him and asked him if this was a Scam. But me and my wife took the attorney and Rodney for lunch and out of the Blue he told us about the bad Reviews.

Thank you Imbewu Specialised Security for saving us of wasting our time and loosing 50mil Rand.

Romance Scamming my worse Nightmare ever. Please don't get caught. Thanks to Rodney I got my money back within 3 weeks. R600'000.00 is not money you can actually throw away.

I was Scammed by a well known Person in the Farming Industry. I lost R180'000.00. Rodney van Rensburg said to me that he is not a Debt Collector but will be able to assist. After 3 Months I was Contacted by Rodney's Offices for my Banking account details. I then Received the money in 3 Installments.

Thank you Rodney and Team you are much better than the Debt Collector I made used of.