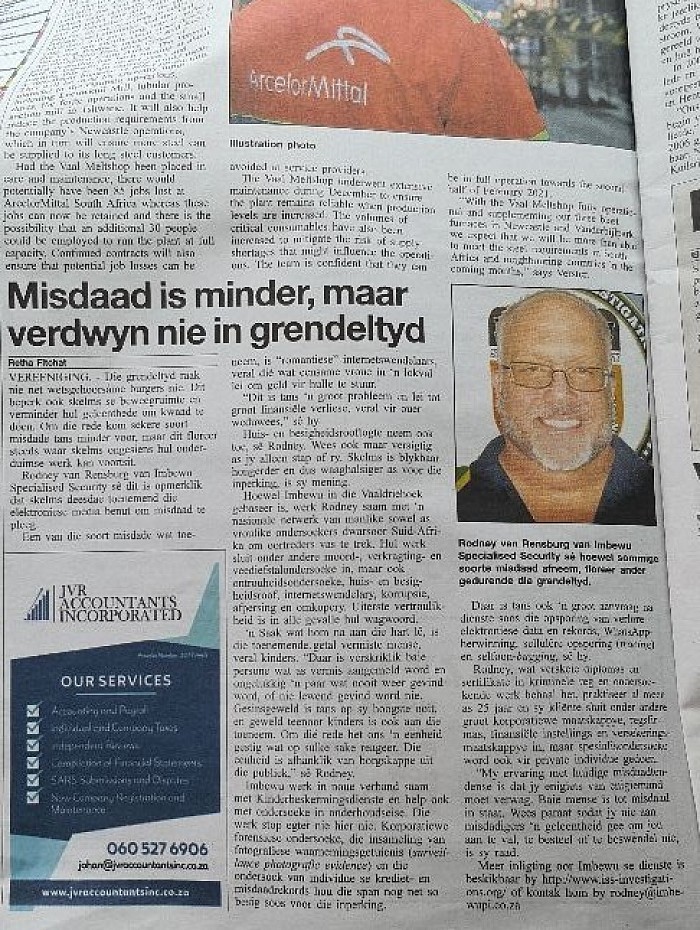 Contacted Imbewu Specialised Security and Investigations in connection with a Fraud Case.

All I had was the persons name and contact number. The SAPS refused assistance.

This Company assisted throu all steps to open a criminal case, traced the person, got my funds back and assisted the SAPS with arrest.

Contacted Imbewu Specialised Security and they assisted me with a Romance Scammer.

Traced him and the Person are busy paying me back.

My boyfriend cheated on me. I did not know what to do and where to start. I then googled and came across Rodney van Rensburg.

I then Contacted him and we agreed apon a mandate. I then ask my parents to assist me with Payments but, unfortunately my dad googled Rodney and saw some bad Reviews. He contacted and shared it with me. I immediately contact Rodney and still made use of his services. I just followed my feelings.

I was Surprised when Rodney contacted me 4 days later with results. It actually saved my parents thousands of Rands not to waste their money on  my wedding.

My son was Missing since 24/02/2020 where I had no Contact with him. I thought that im going to loose my mind. Tried Several PI's, Pink Ladies and more.

I then contacted Rodney van Rensburg and he agreed to find my son for me.

3 Days later he contacted me and said that he found my son. My son then left me a voice note. Rodney is now assisting me to get my son back home. 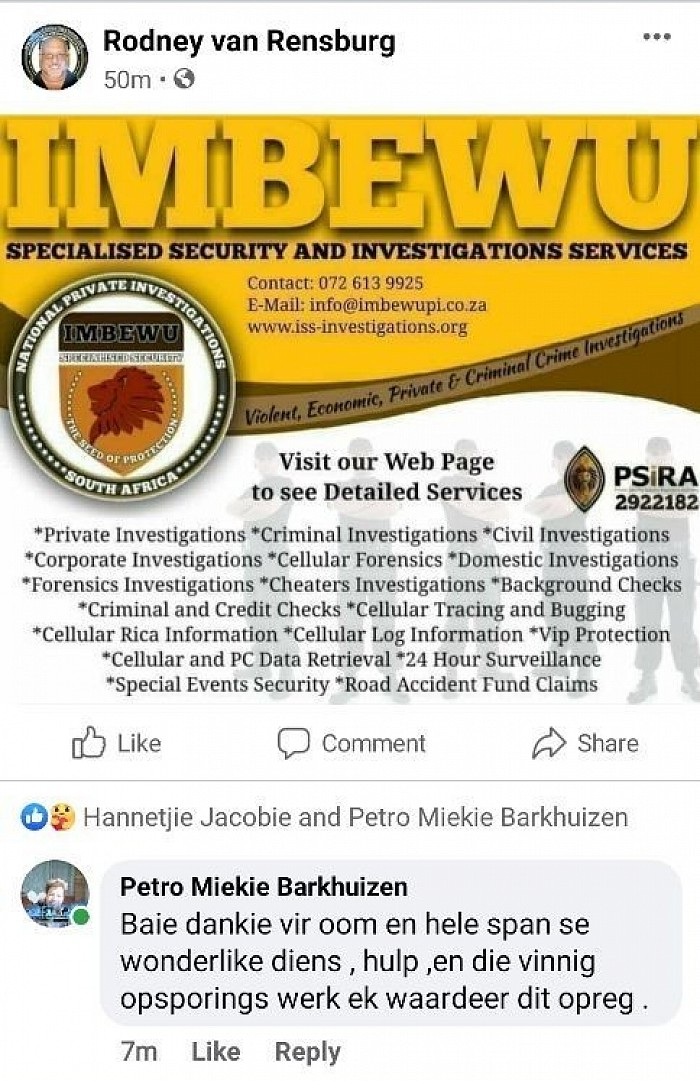 After My Brother was Missing for a week I Contacted Private Investigator Rodney van Rensburg for assistance. I gave him all my Brothers Information and he was Found on a Mountain in Sabie. They tracked his Vehicle and Searched the Mountain.

Thank God Rodney and his team found him in time where he was taken to Hospital.

My name is Monique Grobler and I would like to keep the Estate Agency Anonymous.

We had a Block of Flats which were high jacked by Nigerians and the tenants was forced to pay rent to them or they would be evicted by the leader who owned a Security Company.

We then decided to make use of Rodney van Rensburg which is a Private Investigator and well known to our President of the Estate Agency.

Mr. van Rensburg joined us at the flats where a armed Guard refused us Entry. Rodney then contacted his team, SAPS and The Private Security Industry Regulation Authority of South Africa. Lucky for us an Inspector of the Authorities were not far busy with Inspection at a local Security Company and assisted with the SAPS.

They arrested the Guard for not being registered by PSiRA, in possession of an unlicensed Fire arm as wel as his papers for being in South Africa was not legit. The owner of the Company was arrested as well.

We then cleared the Flats and Jonathan placed a Guard to watch over the Flats and Safety of the Residents as well as our Offices.

Jaap and Susan from Sundra

Our Grand son visited his other grand parents for a week. His parents which are both on meth and neglected him refused that he would come back to us.

We tried everything thing and nobody could help us. We then Contacted Private Investigator Rodney van Rensburg from ISS Investigations who said that he will see what he can do.

Rodney then contacted me after a 3 day Surveillance and requested to meet. He showed us pictures where my grandson would walk with the meth pipe and lighter in his hands.

Nobody could assist with a immediate court order. So Rodney and Janine went to the Children's Court Prosecuter and she tried to call the Persons from welfare and with no luck.

So Rodney said now its plan B

We've met up with him and Janine at the Premises where the other grandparents lived and Rodney organized with them to hand me my grand child while my daughter and her boyfriend went to se drugs.

We were threatened by the parents, cops called us and we just referred all calls to Rodney.

Thanks once again for the Continuous care and follow-up.

Thank you Rodney for Confrontation and arrest made. After the lady were arrested she turned around and layed a charge of rape against me. Rodney the Investigated to proof the lies and corrupted SAPS member whom asked me for 5k or he will make sure I will go to jail.

Everything worked out well. The Investigating Officer were arrested as well as the Complainant.

I got arrested for Theft and my wife Contacted an attorney. After Consulting with the Attorney my wife decided to call a Private Investigator.

I was denied Bail.

She contacted Rodney van Rensburg to consult with her and the attorney.

The Investigation Report and CCTV footages of a house next to the house which were allegedly broken into showed footages that the Complainant load his stolen goods onto a bakkie which belongs to his brother (the driver).

Both were arrested and I'm a free man. Shows you how a person can get into trouble for nothing.

During the Lockdown I were caught in a Roadblock and arrested for in possession of a stolen vehicle. My sister called Imbewu Specialised Security and Rodney came out to assist me in this matter. 21h00 they released me and in the Charge office I saw my sister, the guy who sold me the car (handcuffed) and Rodney van Rensburg.

Within 3 Hrs since my arrest.

I struggled for 8 Months to get a non-paying tenant out of my house in Meyerton. Capt and Paster Vic Herbst introduced me to Rodney van Rensburg.

I gave him the Instructions and within 5 days everything was Sorted. I now have new Tenants in my house which were checked by Rodney as well.

I made contact with Imbewu Specialised Security, Private Investigator to assist me with a CCMA matter. Since June 2020 I won a case and a Security Company Recall Security Bloemfontein refused to pay me. Now thank you to Mr Rodney I received my payment in full. 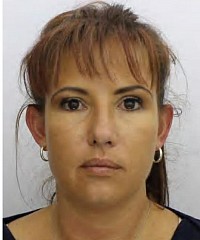 Bad mouthing us in Person and as a Company whom never did any Business with her. 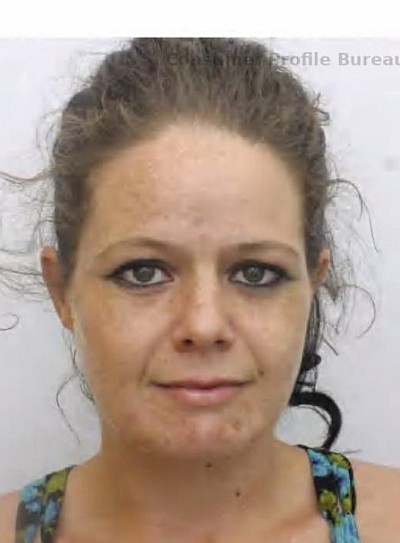 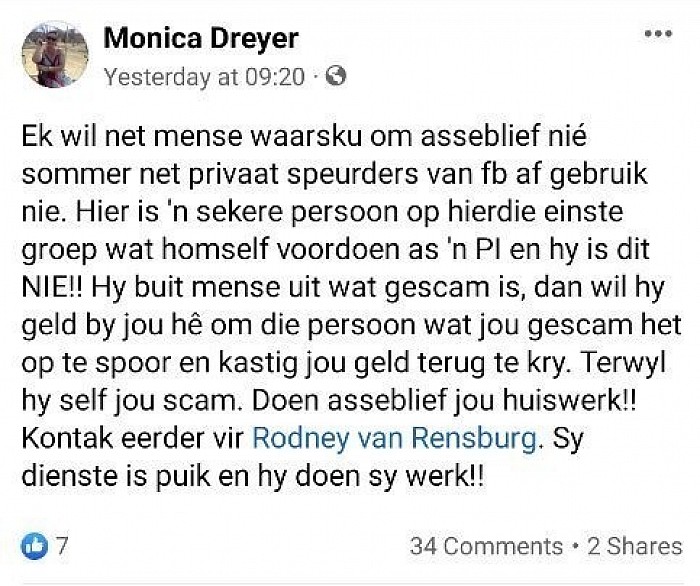 Just after this post was Posted the bad Slandering Started

Michelle really don't like other Private Investigators to assist people in need on her group. She's the only Unregistered person to Investigate her groups Cases. She also likes to slander people's names but not for long.

Yes, every Private Investigator or Business do have unhappy clients. And if you feel that you were ripped of go to the small claims Court and sort it out. 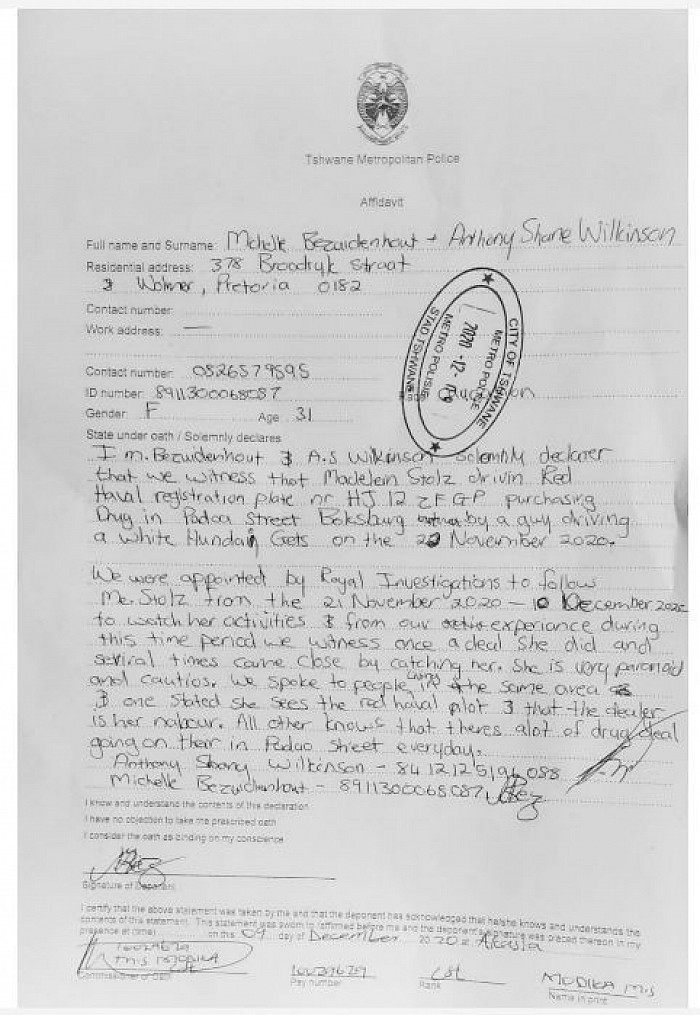 This is a Affidavit from a wannabe Private Investigator 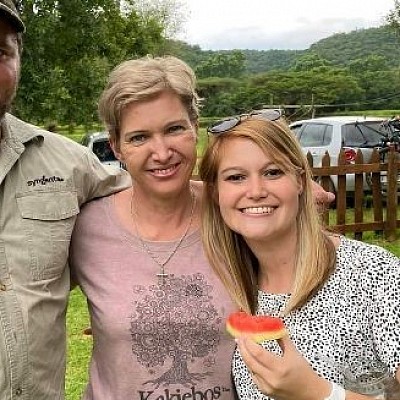 Lara Barnard and her Daughter Teneal Van der Merwe
This lady hired me to trace the Scammers whom Scammerd her out of Funds.
Now, she knew exactly that the persons must first be traced and from there we Investigate if it's possible to retrieve her funds.

Then more people whom were Scammed by Smith Cycles contacted me and I then decided not to charge everyone an amount so let's share the costs.

I traced the Scammers but keep in Mind the scammers can now be arrested but the clients first wants their funds to be retrieved and the main guy is not among them.

Lara Barnard then wanted a Refund but unfortunately most of the work was already done.

Now her Daughter Teneal Van der Merwe is Slandering my name by commenting by all my Posts that I'm a Scammer.

I Bought a Car, But never Received it.

I contacted ISS-Investigations for assistance.
I Bought a car and never Received it. Not that I've never seen it, took it for a test drive. I then Went to Germiston SAPS and they couldn't assist because according to them it's a Civil Matter.
Rodney and Jonathan then Confronted the Person and gave him an Option to rather give me the Vehicle or Refund my Funds. The guy wanted to Refund but already used some of the funds. Rodney and Jonathan have been there until he made a plan to Refund me in full 11 Hours in Confrontation.
Rodney van Rensburg